A tarsal coalition is a condition where one or more of the bones of the hindfoot (talus, calcaneus, and navicular) do not fully separate during development. These bones normally split apart (forming a joint) in the early part of pregnancy when the embryo is developing. The coalition holding the bones together can range from flexible fibrous tissue, cartilage, or a rigid bridge of solid bone. The effect of a tarsal coalition is that the position of the hindfoot tends to be fixed in patients with a tarsal coalition. Sometimes the foot is fixed in a neutral position but sometimes it is fixed in a fairly flatfooted position. In either case, the hindfoot does not move normally.

The most common tarsal coalitions are:

Figure 1: Flatfoot in a Child due to a Tarsal Coalition 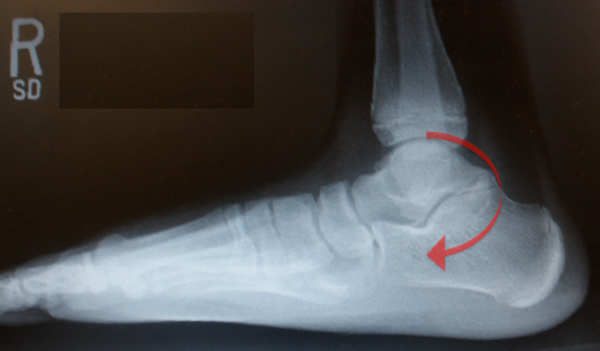 However, in many instances, a tarsal coalition will not be seen on a regular x-ray and a CT scan or MRI will be needed to establish the diagnosis. CT scan can best determine the extent of bone bridging in larger coalitions, but MRI is best for smaller, non-bony coalition lesions.

A variety of non-operative treatments may be helpful in managing the symptoms of a patient with a symptomatic tarsal coalition. These include:

Fusion is reserved for those joints with extensive coalition (regardless of age), where resection of the coalition would leave an unstable joint, or when the cartilage of the joint is damaged as a consequence of the abnormal stresses placed on the joint by the coalition, such as when a coalition is diagnosed in an adult.