Characteristics of a Flat Foot

Approximately 30 percent of the population have a moderately to extremely flat foot type. As the name suggests, a flat foot is one where nearly all of the sole of the foot is touching the ground during standing. Flatfooted people have feet with the following characteristics:

There are two primary reasons why someone would have a flat foot.

The second major cause of a flat foot is a very tight and inflexible calf muscle. In this case, the foot will flex up through the ankle joint (dorsiflexion) toward the person and quickly meet resistance from the tight calf muscle. If the ankle joint does not allow for adequate upward flexing (dorsiflexion) due to a tight calf muscle then the foot rotates upward around the joint in front of the ankle (the talonavicular joint). However, the talo-navicular joint not only moves up and down, it also moves to the outside. This rotates the front part of the foot to the outside (abduction) causing the arch to collapse inwards. A tight calf muscle (usually hereditary) is a fairly common cause of flat foot. Pediatric flatfoot (flexible flatfoot in a child) is almost always associated with a very tight calf muscle. This condition is often asymptomatic but sometimes worrying to parents.

These two causes of a flatfoot deformity are often related and both seem related to the evolution of the foot. This explains why many people with flat feet also have a parent or grandparent with flatfeet.

During walking, there is two to three times the weight of the body going through the foot. This force can take the form of jamming (compression) forces, which act through the joints, or a pulling (traction) forces, which act on ligaments and tendons (Figure 2). Because there is so much movement in the medial column with flat footed people, all the tendons on the inside of the ankle (especially the posterior tibial tendon) have to work extra hard to pull the foot into the shape of a rigid lever prior to the foot pushing off the ground during gait.

Figure 2: Traction and Compression Forces in a Flatfoot Deformity. 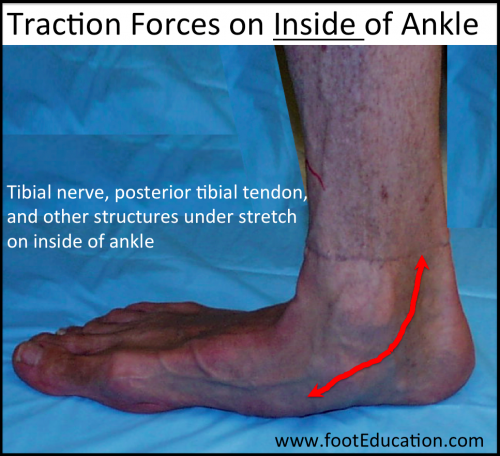 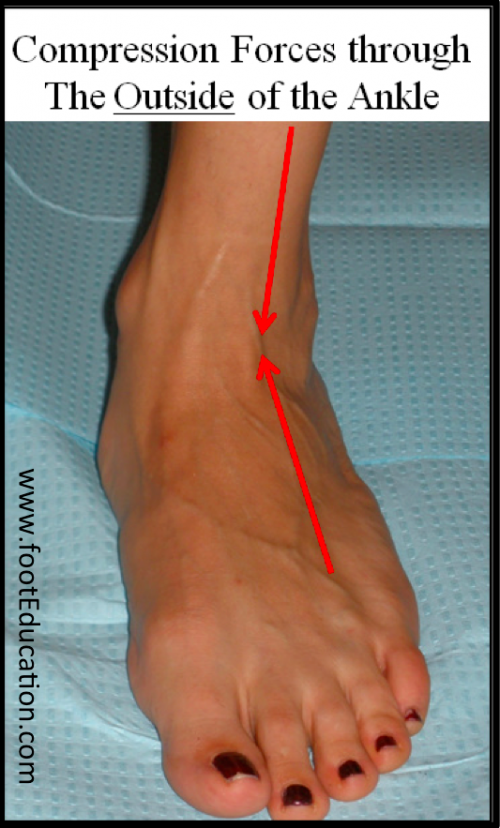 As a result of the exaggerated traction forces acting on the inside of the ankle, flat-footed people are much more likely to develop problems related to repetitive overload of the structures on the inside of the ankle and arch. These problems include: posterior tibialis tendonitis (acquired adult flatfoot deformity), tarsal tunnel syndrome, and plantar fasciitis (a list commonly known as the terrible triad).