Chronic posterior tibial tendon insufficiency can result in acquired adult flatfoot deformity, also referred to as pes planus, a fallen arch, an abnormally pronated foot, or simply flatfoot deformity. This is a chronic foot condition where the soft-tissues (including the posterior tibial tendon, deltoid and spring ligaments) on the inside aspect of the foot and ankle are subject to repetitive load during walking and standing. Over time, these structures may become painful, swollen, or incompetent. When these supporting structures fail, the result is a change in the alignment of the foot. This condition is typically associated with a progressive flatfoot deformity, leading to increased strain on the supporting structures on the inside of the ankle, and loading through the outer aspect of the ankle and foot. Both the inside and outside of the ankle can become painful, resulting in significant disability. This condition can often be treated without surgery by strengthening the involved muscles and tendons, or with bracing. When non-operative treatment fails, surgery can improve alignment and pain through soft tissue transfers, realignment of bones or fusions. Alignment and function can be restored, however, the time to maximal improvement is typically six months to a year. It is also important to realize that not all flatfoot deformities result from problems with the posterior tibial tendon. A flat foot can be a normal variant and does not necessarily need treatment if it is non-painful and does not limit function. In other words, some people have “normal appearing arches,” some people have “high arches,” and other people have “pronated, or flat appearing arches.”

Patients with acquired adult flatfoot deformity typically provide a history of longstanding pain at the inside of the foot and ankle, resulting in progressive, painful flatfeet (Figure 1). Symptoms of pain may have developed gradually as a result of overuse, or they may be traced to one injury. Typically, the pain localizes to the inside (medial) aspect of the ankle, under the medial malleolus (see circle in Fig. 1). However, some patients will also experience pain over the outside (lateral) aspect of the hind-foot, because of the resultant deformity and pressure or impingement on the lateral structures of the foot and ankle. This usually occurs later in the course of the condition. Patients may walk with a limp or, in advanced cases, be disabled due to pain.

Looking at the patient when they stand will usually demonstrate a flatfoot deformity or a pronated foot (marked flattening of the medial longitudinal arch). The front part of the foot (forefoot) is often splayed out to the side, leading to the presence of a “too many toes” sign (Figure 2). This sign is present when the toes can be seen from directly behind the patient. 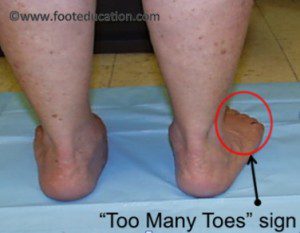 Posterior tibial tendon dysfunction may affect the patient’s walking, as the patient’s dysfunctional posterior tibial tendon can no longer stabilize the arch of the foot when weight is placed on it. There is often tenderness to touch and swelling over the inside of the ankle just below the bony prominence (the medial malleolus). There may also be pain in the outside aspect of the ankle with palpation. This pain originates from impingement or compression of two tendons between the outside ankle bone (fibula) and the heel bone, (calcaneus) when the patient is standing. 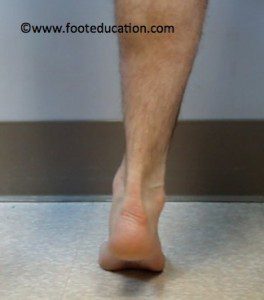 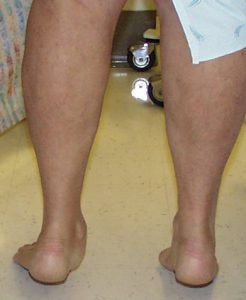 X-Rays of the foot taken while weight bearing allows the physician to assess the extent of the flatfoot deformity (Figures 4a and 4b).

Figure 4b: X-Ray of Flatfoot Deformity

MRI is usually not indicated for patients with acquired adult flatfoot deformity, as the diagnosis and the classification can be established on physical examination. However, if there are other clinical signs that suggest either a problem within the ankle, the subtalar joint, (intra-articular pathology) or another source of pain, then an MRI may be indicated.

Acquired adult flatfoot deformity has been classified into four categories.

The vast majority of patients with acquired adult flatfoot deformity have reached stage 2 by the time they seek treatment from a physician.

Nonoperative treatment of stage 1 and 2 acquired adult flatfoot deformity can be successful.

General components of the treatment include:

Specific components of treatment that over time can lead to marked improvement in symptoms include:

If the posterior tibial tendon is intact, a series of exercises aimed at strengthening the elongated and dysfunctional tendon can be successful. In stage 1 or 2 deformities, this may be combined with an ankle brace and an off-the-shelf or custom made orthotic insertwhich may help to support the arch.

Changing the shape of the foot can be achieved by one or more of the following procedures:

Stage 3 acquired adult flatfoot deformity may be treated operatively with a hindfoot fusion (arthrodesis). This is done with either a double or triple arthrodesis – fusion of two or three of the joints in hindfoot through which the deformity occurs. This is typically performed in such a way that the underlying foot deformity is corrected first.

The recovery from surgery is dependent upon the particular combination of procedures that are performed. However, if cutting and repositioning bones or fusing joints is required, (as it usually is) a typical recovery would be:

It is common for a patient to take 4-6 months to achieve much of their recovery, and 12-18 months before they reach their point of maximal improvement.