Equinus contractures are the inability to bring the foot up to a neutral position (a right angle to the lower leg) due to either tightness of the muscles and/or tendons in the calf, scarring of the ankle joint capsule and other restraining structures, or a bone spur at the front of the ankle that restricts normal ankle motion. It is named after horses (equine) who essentially walk “on their toes.”

The largest muscles within the calf are called the gastrocnemius and soleus. The gastrocnemius is the larger and longer of the two, arising from above the knee joint before joining the soleus below in a manner that makes the gastrocnemius naturally more prone to tightness in humans.  As these muscles course together towards the foot, they eventually combine to become one tendon called the Achilles, which inserts itself on the heel. The primary function of this “gastroc-soleal complex” in humans is to control motion through the ankle joint and plantarflex the foot to promote push off strength.

Occasionally, one or both of these calf muscles can become too tight, which can result in what is termed a contracture or an equinus deformity. If this happens, it will typically become difficult to move the foot in an upward direction, otherwise known as a restriction in dorsiflexion. This anatomical problem can result in an altered gait and lead to various problems over time that may include: chronic pain, ulceration, or other types of mechanical breakdown in the foot or ankle.

Rather than walk on their toes, most people will naturally and unconsciously compensate for an underlying equinus by developing greater (excess) upward motion in other nearby joints such as the transverse tarsal joints. Many gastrocnemius contractures are subtle, and patients are often asymptomatic. When present, however, this problem over time will often result in significant and progressive midfoot compensation that results in repetitive overload of various bony and soft tissue structures in the foot during both standing and walking. The presence of such a condition, therefore, can predispose to the development of certain foot conditions, such as plantar fasciitis, acquired adult flatfoot deformity, metatarsalgia, or Achilles tendon disorders.

In general, isolated gastrocnemius contracture is believed to develop from one of several causes:

A gastrocnemius equinus contracture (Figure 1) occurs when tightness in the outer calf muscle (gastrocnemius) leads to limited ankle dorsiflexion (motion through the ankle joint itself). To compensate for this tightness and allow the foot to settle on the ground, a compensatory motion will often occur in the joint in front of the ankle, the transverse tarsal joint, which is made up of the talonavicular joint and the calcaneal-cuboid joints (Figure 2). The hallmark of a gastrocnemius equinus contracture is that it will correct (i.e ankle motion will become full) when the knee is bent because the pressure is taken off the gastrocnemius muscle, since it attaches above the knee joint.

Figure 2: Compensatory motion through the joints in front of the ankle joint 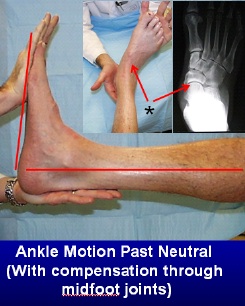 Calf muscle contracture, or “equinus” can occur from tightness that is isolated to the gastrocnemius muscle or the result of tightness in both of these muscles together, and it is important to distinguish between these two causations because treatment to remedy the problem and prevent long term consequences can differ significantly, While physical therapy, stretching exercises, and even daily splinting can sometimes be effective in preventing or alleviating this condition, often the problem remains refractory to such management and a surgery may be required to release these tissues in a manner that allows restoration of normal ankle/foot upward motion (dorsiflexion). When the problem is isolated to tightness of the gastrocnemius tendon, the surgery to release this contracture is called a gastrocnemius recession or “Strayer” procedure. When indicated, the operation can be very effective in resolving the various clinical complaints a patient might have that are associated with tightness of this muscle and remain non responsive to non-operative therapy. Before any surgery is considered, a regular calf stretching program (with the knee straight, as in Figure 3) should be recommended for at least a few months as in many cases this non-operative measure can result in resolution of symptoms. 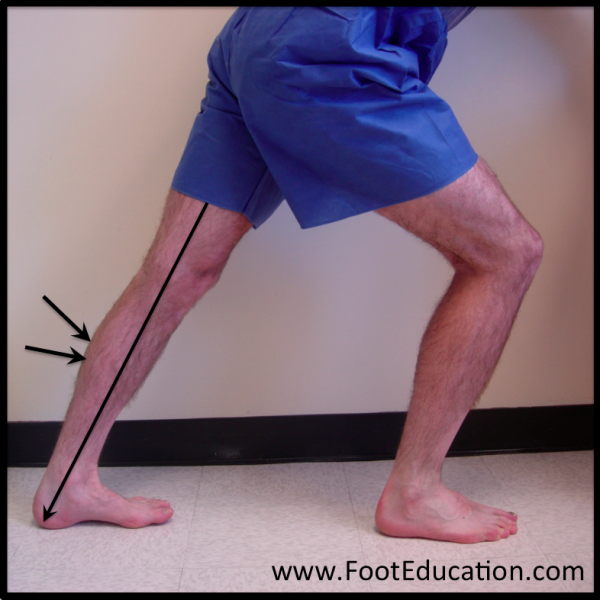