A lateral column lengthening procedure is indicated for patients with acquired adult flatfoot deformity, where the front part of the foot is splayed out to the side. This procedure is often combined with a medializing calcaneal osteotomy, (often referred to as the “All American procedure”), as a technique for adjusting acquired adult flatfoot deformity. The lateral column lengthening procedure provides a powerful correction in patients with flatfoot foot deformities, however, though it is a procedure with clear advantages, there are also potential disadvantages. 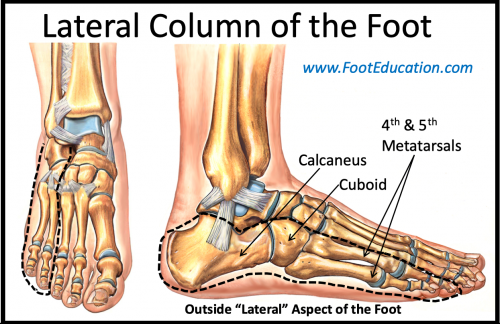 One way of performing this procedure is by cutting the bone (osteotomy) through the front part of the calcaneus. An osteotomy (bone cut) of the calcaneus is performed right before the calcaneal-cuboid joint, which is then spread about 7-10 mm so that the bone graft can be inserted, in order to lengthen the column (Figure 2). 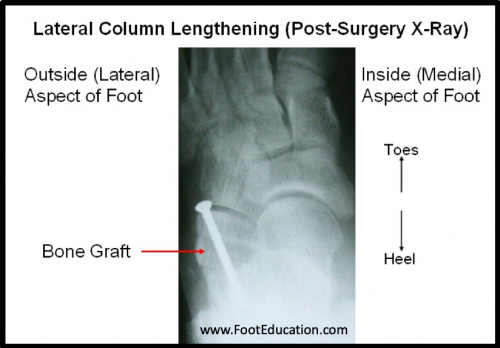 Another way of doing this procedure is done through the actual calcaneal-cuboid joint itself. The bone graft is inserted in the joint, which serves as a joint fusion while also lengthening the lateral column.

A lateral column lengthening procedure is a very powerful procedure, since it can dramatically change the shape of the foot. The advantages of this procedure include the ability to take a pronounced flatfoot deformity and turn it into a near normal looking foot. However, the disadvantages include the potential of creating a stiffer foot; possibly overcorrecting the foot (which may lead to more symptoms); and a higher rate of specific complications, such as painful hardware, sural nerve irritation, and nonunion.

For the first 6-10 weeks, the patient is either non-weight bearing or limited weight bearing through the heel, until the bone graft has healed.

About 75% of the recovery occurs within the first 5-6 months. However, full recovery can take up to 18 months.