Ligaments of the Foot and Ankle Overview

Ligaments are strong connective tissue composed of fibrous tissues. They connect bones to other bones, and are extremely important in stabilizing joints.

The ligaments of the foot and ankle can be divided into groups including:

2. Ligaments of the Upper Ankle (Holding the tibia and fibula together)

3. Ligaments of the Subtalar Joint

4. Ligaments of the Foot

The anterior talo-fibular ligament is often thought of as the “ankle sprain ligament”, because it is the one that is most often damaged when the ankle is rolled. It runs down from the fibula and to the outer front portion of the ankle, in order to connect to the neck of the talus. This ligament functions to stabilize the ankle joint and keeps it from rotating inward too much, which is what happens in a common ankle sprain. The ligament itself is very broad, more like a sheet than a rope, and when it is sprained, it tends to tear part of the way rather than into two pieces. Another possibility is that it becomes stretched out in places, which makes the ankle joint looser than normal, potentially leading to symptomatic ankle instability. 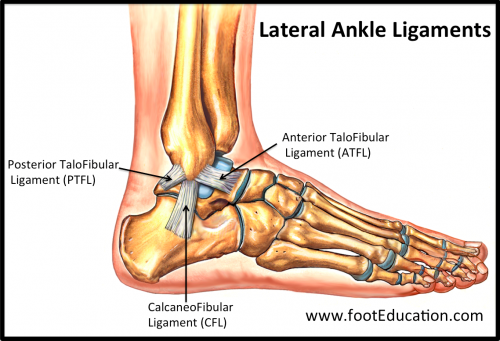 The posterior talo-fibular ligament runs from the back lower part of the fibula and into the outer back portion of the calcaneous. This ligament functions to stabilize the ankle joint and subtalar joint. Injuries are rare to this ligament, unless there is an ankle dislocation or subluxation.

The deltoid ligament is a fan shaped band of connective tissue on theinside of the ankle. It runs from the medial malleolus (the bottom portion of the tibia) and down into the talus and calcaneous. The deeper branch of the ligament is securely fastened in the talus, while the more superficial, broader aspect runs into the calcaneous. This ligament is extremely strong and stabilizes the inside of the ankle. It can be torn, but it takes tremendous force. Tears of this ligament are most common when the ankle undergoes an unstable ankle fracture. Like the anterior talo-fibular ligament, the deltoid is rarely torn completely and tears tend to resemble a torn or stretched sheet. 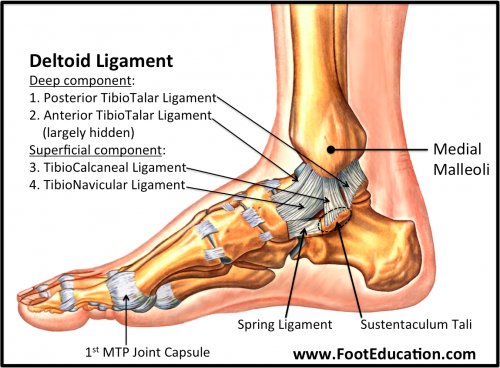 2. Ligaments of the Upper Ankle (Holding the tibia and fibula together)

The anterior inferior tibial fibular ligament is commonly known as the “high ankle sprain ligament”. It is positioned on the lower front of the ankle and helps keep the tibia and fibula together. Injuries to this ligament occur when the foot is stuck on the ground and rotated inwardly. This injury can be very painful and can scar, which can cause irritation to the outside of the ankle joint, a condition known as anteral-lateral ankle impingement.

Figure 3: Ligaments of the Upper Ankle 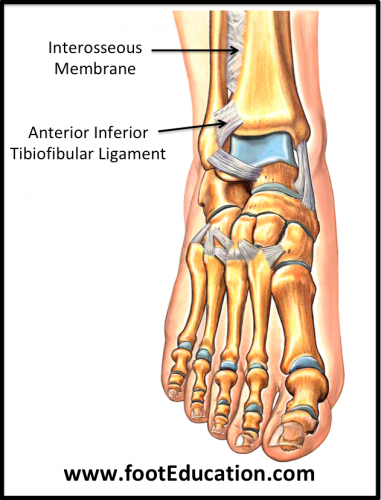 3. Ligaments of the Subtalar Joint

4. The Ligaments of the Foot

The Lisfranc ligaments stabilize the small bones of the mid-foot, as well as the transverse tarsal joint. They are stronger across the plantar (sole) of the foot than on the dorsal (top) aspect, though they are very strong in either case. These ligaments were described by the Napoleonic era surgeon Jacques Lisfranc, who noticed that when people fell from their horses but got their foot stuck in the stirrup, they dislocated portions of the mid-foot. These dislocations (Lisfranc Injuries) are very problematic, and took a long time to heal. 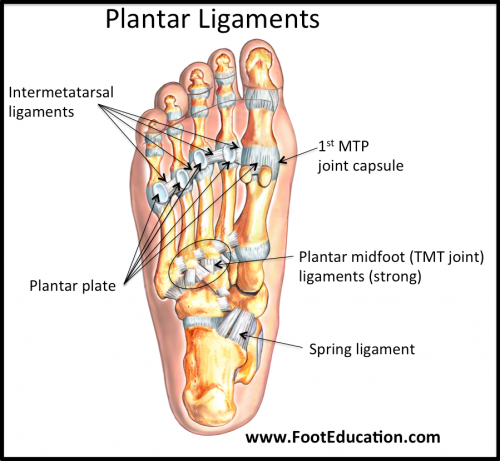 These ligaments run between the metatarsal bones at the base of the toes. They connect the neck region of each metatarsal to the one next to it and bind them together. This keeps the metatarsals moving in sync. While it is possible to tear these ligaments, it is also possible for them to irritate the digital nerve as it crosses the ligaments, potentially leading to a Morton’s neuroma.

The Joint Capsule of the Big Toe (Figure 4)

The connective tissue of this ligament takes the form of a capsule. It goes from the inner portion of the first metatarsal head and stretches to the distal phalanx on the inside. This allows this ligament to stabilize the great toe on the inside. In the situation where a person develops a bunion, this band gets stretched out, and the toe changes position because of this.