What are bone spurs?

Bone spurs are known formally as “osteophytes” (“osteo” = bone; “phyte” = a growth). Bone spurs are a prominent bone formation that develop in response to some specific stress or stimulus that causes bone cells (osteoblasts) to form excessive bone.  Not all bone spurs cause pain, and bone spurs are not a disease on their own. Many bone spurs are just findings on an x-ray. However, some bone spurs can occur along with pain.

Why do Bone spurs occur?

Bone spurs occur either because of: 1) repetitive traction (pulling) or 2) due to underlying degenerative arthritis in the surrounding joint. In both instances localized bone growths are stimulated to form, albeit for slightly different reasons.

Repetitive traction means that something is pulling over and over again. When a structure pulls on an edge of a bone, a traction spur may form over time. Examples of this phenomenon include insertional Achilles tendonitis due to the repetitive pull of the Achilles tendon, or anterior ankle bone spurs that often form in soccer players due to what is believed to be the repetitive loading of the ankle joint capsule when they kick a soccer ball. Any increased repetitive loading (ex. with increased weight) combined with a tendency to form new bone (ex. with aging) will predispose a bone spur to form, in some patients.  It is interesting that other patients may have the same stresses, but develop no bone spurs.

Associated degenerative joint arthritis can also lead to the formation of bone spurs associated with that joint. The increased cellular activity that occurs when a joint has lost some or all of its protective cartilage will often lead to bony prominences associated with both sides of the joint. This is commonly seen in ankle arthritis, hallux rigidus, or any joint with significant degenerative arthritis (osteoarthritis).

Where do bone spurs occur?

Bone spurs can occur anywhere in the foot where tendons or joint capsules are repetitively loaded or stressed – or associated with any joint that has arthritis or is inflamed. Some common areas where bones spurs form in the foot include:

Calcaneal heel spurs can form at the Achilles insertion site due to repetitive pulling from the Achilles (Figure 1). They can also form near the plantar fascia origin (actually the origin of the flexor digitorum brevis muscle). 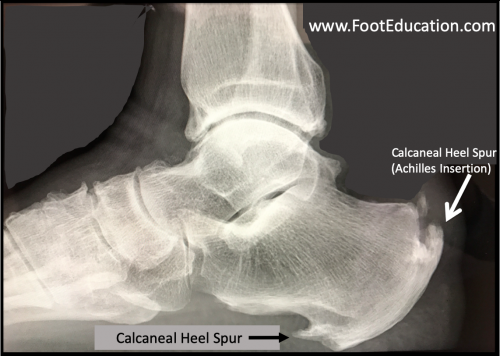 Bone spurs can form at the front of the ankle joint as a result of traction on the joint capsule (often seen in soccer players from repetitive kicking) leading to anterior ankle impingement; or secondary to degenerative ankle arthritis which causes the bone spurs to form around the ankle joint due to the irritation in the joint from the arthritis (and potential to limit motion through the arthritic ankle joint).

Bone spur on the top of the foot (Tarsal Boss)

Top of the foot (dorsal foot) often form in response to arthritis in the midfoot (tarsometatarsal) joints leading to a tarsal boss. 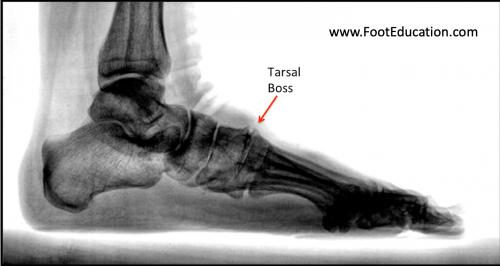 How do they cause symptoms?

If the bone spurs grow large enough and are in a prominent position. In this situation (ex. tarsal boss, hallux rigidus) bone spurs can cause irritation to the overlying soft-tissue, especially if constrictive shoes are worn.