Tarsal boss is characterized by a painful prominence on the top of the midfoot. It is often aggravated by constrictive footwear. The underlying problem is a prominent bone spur that may form in response to arthritis in one or more of the midfoot joints. Treatment is usually non-operative, aimed at avoiding pressure overlying the prominent bone. Taking care to ensure that the tongue of the shoe is not tied tightly and that there is an associated soft padding over the bony prominence can greatly improve symptoms. In addition, stiff soled shoes can and skip lacing be helpful with respect to symptoms. Occasionally, surgical removal of the bone spur or even fusion of the underlying arthritic bone joint may be necessary.

A painful lump on the top of the foot is the main symptom of a tarsal boss. The lump is usually located over the mid part of the foot. It may create pain with constrictive footwear. It may also be associated with an aching pain in the mid foot, as there is a correlation between the presence of a prominent tarsal boss and midfoot arthritis.

An examination will demonstrate a lump on the top (dorsal aspect) of the midfoot. This lump is often hard from the underlying bone. This differentiates a tarsal boss from a ganglion cyst, which is a fluid-filled sac that is usually softer and mobile.

Plain x-rays of the foot will usually reveal a bone spur in the top part of the midfoot. (Figure 1) 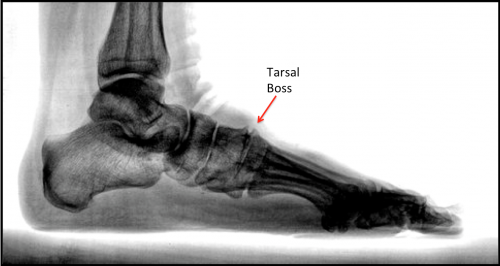 The tarsal boss, or bone spur, most frequently occurs at the first, second, or third tarsal-metatarsal joints, and is often an indication of wear and tear in these joints, (midfoot arthritis). Essentially, the bone spur creates the prominence, which leads to the localized discomfort from the pressure caused by a constrictive shoe.

Most tarsal boss presentations can be treated non-operatively. Creating a soft area in the shoe, and not tying shoes quite as tightly over this area will often lead to resolution of these symptoms, although the prominence on the top of the foot will not be fully resolved. In addition, shoes with an associated stiff sole can be helpful as this will put less force through the mid part of the foot. Another technique, called “skip lacing” (Figure 2), reduces pressure by skipping the crossed part of the laces that will cross directly over the prominence. 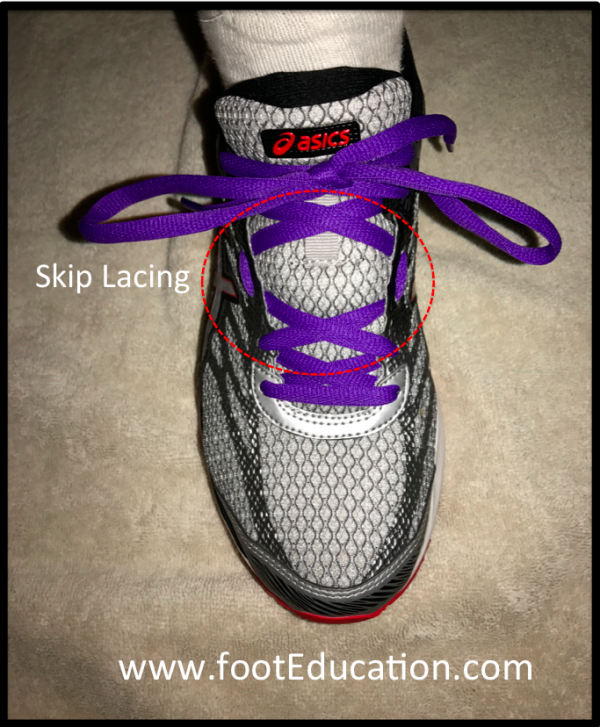 Occasionally the prominence of the bone spur or of the associated pain from the underlying midfoot arthritis of the tarsal-metatarsal joints will necessitate surgical intervention. In this instance, there are two surgical procedures that can be performed: