The Five Primary Goals of Walking

The first goal of walking is to move the body forward toward a desired location and at a desired speed.

The second goal of walking is to use the least amount of energy possible to achieve the first goal. The body does this by moving in as straight a line as possible while moving forward. During walking, the most energy efficient movement is one in which the body moves up and down very little.

The third goal is to cause the least amount of pain for people with painful foot conditions. Our brains have a variety of strategies for achieving this goal, including putting less pressure on a painful foot, or alternating the foot’s position when we walk to limit discomfort.

The fourth goal for walking is for the foot to accommodate for uneven terrain and to a certain extent serve as a shock absorber for dispersing the force of the body as it lands.

The fifth goal is for the foot to form a rigid lever toward the end of the phase of gait where the foot is on the ground, in order to provide a way to propel the body forward.

The Phases of Walking

One way to think about the phases of walking is to think of what happens to each foot when we walk. In this situation, there are two phases: Stance phase and Swing phase (Figure 1). 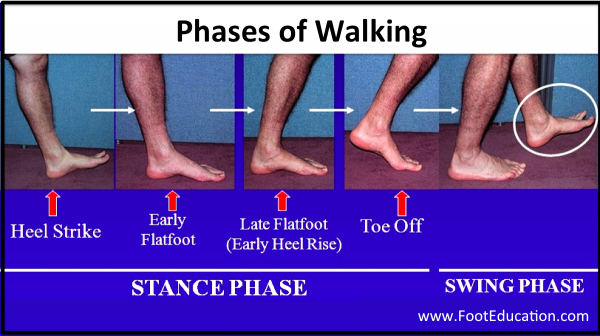 A more convenient and precise way to think about the stance phase (foot on the ground) of walking is to consider the five sub-stages that a single foot undergoes (Figure 1). They are as follows: Heel strike, Early flatfoot, Late flatfoot, Heel rise, and Toe off.

The heel strike phase starts the moment when the heel first touches the ground, and lasts until the whole foot is on the ground (early flatfoot stage).

Once the body’s center of gravity has passed in front of the neutral position, a person is said to be in the late flatfoot stage. The “late flatfoot” stage of gait ends when the heel lifts off the ground. During the “late flatfoot” phase of gait, the foot needs to go from being a flexible shock absorber to being a rigid lever that can serve to propel the body forward.

As the name suggests, the heel rise phase begins when the heel begins to leave the ground. During this phase, the foot functions as a rigid lever to move the body forward. During this phase of walking, the forces that go through the foot are quite significant: often 2-3x a person’s body weight. This is because the foot creates a lever arm (centered on the ankle), which serves to magnify body weight forces. Given these high forces and considering that the average human takes 3000-5000 steps per day (an active person commonly takes 10,000 steps/day), it is not surprising that the foot can easily develop chronic repetitive stress-related problems, such as metatarsalgia, bunions, posterior tibial tendon dysfunction, peroneal tendonitis, and sesamoiditis.

The toe off stage of gait begins as the toes leave the ground. This represents the start of the swing phase.

The defining difference between walking and running is that when running, there is a period of time both feet are off the ground (the “float” phase). Also because running is associated with greater speeds, the forces that go through the foot when it lands can be substantially greater than during walking (often 4-5x body weight during running and even up to 6-7x body weight during sprinting).

Movement of the Main Joints During Walking

There are a number of joints in the foot and ankle that move during walking. These joints serve critical functions during normal walking. The ankle joint is critical to normal walking biomechanics, but so too are the other hindfoot joints – a combination of the subtalar joint and the transverse tarsal joint (Figure 2). The transverse tarsal joint is not a single joint but rather the combination of the talo-navicular and the calcaneo-cuboid joint. The combination of the subtalar joint, talonavicular joint, and calcaneocubboid joints allow the foot to sweep under the talus (lower bone of the ankle) and thereby position the foot where it needs to be depending on the terrain.

How the Muscles Work During Walking

The anterior compartment is most active, which means that the tibialis anterior muscle, the extensor hallicus longus, and the extensor digitorum longus work to gently lower the foot onto the ground. If these muscles do not work, such as would be the case in someone with a drop foot, the foot will tend to slap onto the ground when it lands.

As the body’s center of gravity passes over the foot, the posterior compartment muscles begin to contract. This contraction of the calf muscle serves to control the body movement as it goes forward so that the body does not fall forward. During this phase of gait (late flatfoot), the calf muscle is strongly contracting and lengthening. This is called an “eccentric” muscle contraction, and it serves to generate an extraordinary amount of internal force within the calf muscle and Achilles tendon. This is why most Achilles tendon ruptures and calf tears occur during this stage gait. During the late flatfoot phase, the posterior tibial muscle also contracts helping to “lock” the foot and create a rigid lever. Therefore in patients with posterior tibial dysfunction often have flatfooted gait with a limited or absent heel rise.

During the heel rise phase, the calf muscle continues to contract, but is now shortening rather than lengthening (performing a concentric contracture). This lasts until the toe off phase.

The primary sign of an antalgic or painful gait is the reduced amount of time spent in the stance phase. This is because people do not want to spend any more time than necessary on a foot that is causing them pain. While the stance phase is usually divided equally between the two legs, someone with a painful foot will spend substantially less time on the injured foot, perhaps only 20-30% of their gait rather than 50%. Another sign of painful gait is a decreased stride length, which results from patients not wanting to push off from their painful foot as powerfully as normal. Therefore, one stride tends to be much longer than the other.

Another example of an abnormal gait is a high-steppage gait pattern. This form of walking is seen in patients whose anterior compartment muscles do not function normally (ex. Patients with a drop foot). This lack of anterior muscle compartment functioning causes the foot to slap onto the ground during the heel strike phase of walking. Patients normally respond to this problem by bending their knee more than normal during the swing phase of gait (the time when the foot is off the ground) to lift the foot higher off the ground. One type of treatment for this type of gait abnormality is to fit the patient with an AFO (Ankle Foot Orthosis), which is a rigid brace that keeps the foot locked in a 90 degree angle.