(ORIF is “Open Reduction Internal Fixation” – opening the injured area surgically, reducing the bones and joints to their proper position, and placing screws and plates internally to fix them in that corrected position)

The Lisfranc joints are located in the midfoot (Figure 1). The main indication for this ORIF of the Lisfranc joints is a displaced or unstable Lisfranc fracture, or a dislocation. The purpose of the surgery is to reposition the bones and joints in the mid-part of the foot, allowing the associated torn ligaments (the strong tissues that hold these bones together and support the arch) to heal. A missed or not treated Lisfranc injury can lead to a loss of the arch of the foot (flatfoot). In order to treat some injuries, mid-foot fusion may be recommended where some of the joints are permanently placed together. 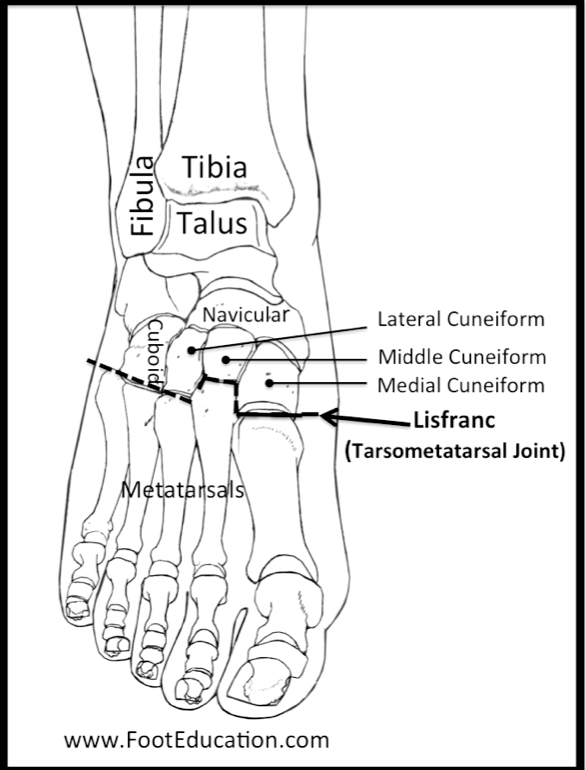 Once the disrupted tarsometatarsal joints are identified, the dissection is carried down to the involved joints and the debris is cleaned out. The disrupted joints are repositioned back to the position they were in prior to the injury. The joints are then fixed with screws, plates with screws, suture based implants, and/or pins (Figure 2). Depending upon the type of injury and time when being fixed, some joints may need to be put together permanently (fusion). One exception is a disruption of the 4th and 5th tarsometatarsal joints; in this case, the bone is provisionally fixed with wires. The wires are then removed after about six weeks so that some movement of these joints can be encouraged. Regaining flexiility of the outside joints of the foot is important for walking. 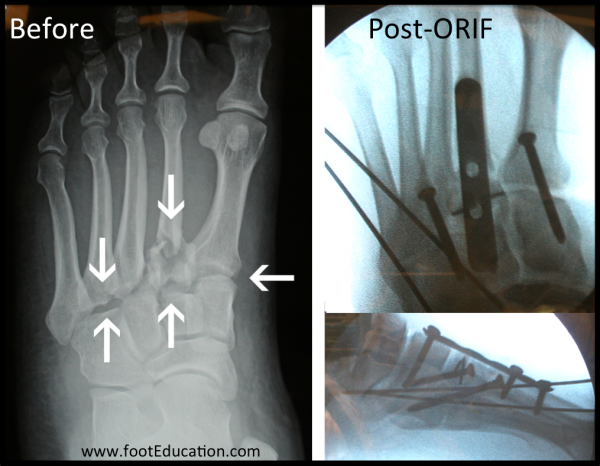 Recovery from surgery to fix a Lisfranc fracture, subluxation, or dislocation can vary depending on the severity of the original injury, and the stability of the fixation. However, a typical recovery might include:

The patient is non-weight bearing to allow for adequate healing of the bones and of the disrupted ligaments. The ligaments actually require a longer time to heal.

The patient can begin to weight-bear as tolerated, provided the foot is protected in a walking boot, such as a CAM walker. This boot (characterized by a rigid sole and a rocker-bottom contour) serves to disperse the force away from the middle of the foot and up the leg. Some surgeons may add an arch support to the boot.

At the 10-14 week mark, the patient can then transition into a stiff soled shoe.

A displaced injury takes a number of months of recovery.

For most Lisfranc injuries, about 70% of the recovery occurs in the first 6 months, but it is often a year or more before our patient has reached their point of maximal improvement following a significant Lisfranc injury. If fixed, some patients may require removal of the hardware to help regain motion of the joints.