A lateral process fracture of the talus is a fracture of the lower bone of the ankle on the outside (lateral) aspect of this bone. It typically occurs when the foot is jammed suddenly, and the outside of the lower ankle bone (talus) is pushed heavily against the adjoining bone (fibula). This can occur in activities such as snowboarding and has lead to this being called a “snowboarder’s fracture.” It is associated with pain and swelling. The patient will often have difficulty walking and may not be able to put weight on the injured foot. If the fracture is not displaced, it may be treated with immobilization in a boot or cast for 6-8 weeks, until the fracture has healed. If the fracture is displaced, surgery is usually required to stabilize the fracture with screws or to remove the fracture fragments.

Figure 1- Fracture of the Lateral Process of the Talus 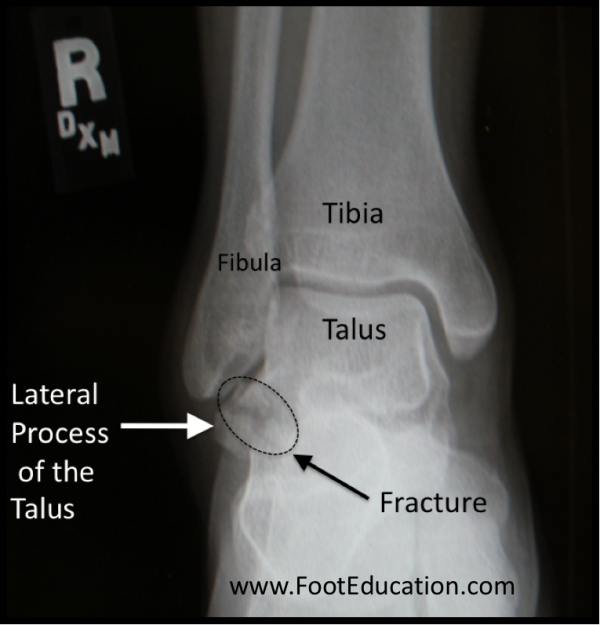 Patients with lateral talar fractures will usually describe an acute injury where their foot rolls outwards and ankle gets jammed on the outside (lateral side). This could occur when a snowboarder stops suddenly, for example. Patients will have pain and swelling in the ankle, particularly over the outside aspect. They will have difficulty in walking and not able to bear weight.

On examination, patients with a lateral process fracture of the talus will have tenderness, swelling and bruising over the outside of the ankle, towards the front and outer border of the foot. The findings can be similar to a severe ankle sprain. Often they will be unable to weight bear. Moving the ankle may increase the pain, and in some cases may cause a cracking sound.

It may be possible to see the fracture on a plain x-ray view of the ankle; however, these fractures can be quite subtle on plain x-rays and may be missed. They can be seen fairly easily on a CT scan or MRI, one of which is often ordered if there are questions as to the nature of the injury.

X-rays and or CT scans not only help us confirm the diagnosis but also help us learn more about the lateral process of the talus, the piece of bone that is broken off the parent bone, the talus. The piece that breaks off can vary in size and a single broken piece or many, and whether the pieces shifted away (displaced) or remain in place (non-displaced). The x-rays and other investigations such as CT or MRI scan can reveal the presence of other injuries that can occur in the vicinity.

If the fracture is such that the piece that is broken remains close and not shifted or in other words completely non-displaced, it can be treated with relative immobilization of six weeks to allow adequate healing in a cast or walker boots. Once the x-rays demonstrate adequate healing, activities can be gradually increased. It is often 3-6 months or more before a full recovery is achieved.

Many lateral talar process fractures are displaced or potentially unstable enough to require surgical fixation.  If surgery is indicated, the fracture area is opened up through an incision on the outside front of the ankle, and a screw or screws are placed into the fracture to stabilize it to a larger part of the talar body (Figure 2).

Occasionally, the fracture will be broken into many pieces (comminuted) that cannot be adequately fixed. In this case, it may be necessary to remove these bone fragments by cleaning out these fragments (debridement) of the ankle. 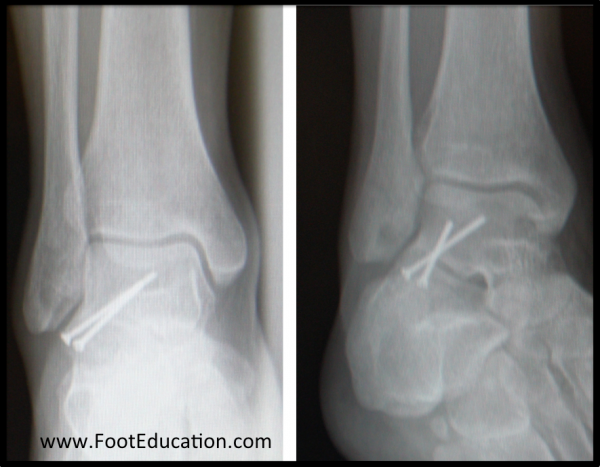 Typically, recovery time from surgery requires six to eight weeks of relative immobilization and non-weight bearing, if the fracture has been stabilized (fixed with screws). If the fracture fragments were just cleaned out (debrided), then weight bearing can be started once the patient feels comfortable. This is an injury that will often take many months to reach its point of maximum improvement.

Complications that are specific to surgery for a lateral talus process include: