Diabetic ulcers can be quite problematic. It is not uncommon for people with diabetes who have developed forefoot ulcers, to ultimately end up with a partial or complete amputation of their foot and even the leg, as a result of the ulcer and spread of infection from the diabetic ulcer.

Patients with longstanding diabetes, who have lost sensation or have diminished sensation in their foot, are at risk for developing a diabetic plantar ulceration on the bottom of their foot. Quite often, patients with diabetes do not appreciate that they have altered or diminished sensation in their foot. The altered sensation prevents them from sensing pain, such as they would normally experience with a blister on their foot or with shoes that do not fit appropriately. Therefore they end up with blistering and subsequent breakdown of skin and deeper tissues over a localized pressure area of the foot, and this can become an ulcer. Often, the area starts off as a callus, or if it occurs quickly, it may appear as a simple blister. However, when the blistered skin is removed, it will reveal a deep ulceration. Patients who lost the protective sensation are therefore at a greater risk of developing an ulcer especially if their feet also have deformities such as a bunion or hammer toes.

Physical examination focuses on the location of the diabetic ulcer as well as the depth. It is important to assess whether or not the ulcer extends down to the bone or into the joint, which could lead to osteomyelitis (bone infection). A foul odor or redness spreading from the ulcer up the foot or the leg signifies serious infection. Typically, the ulcers will occur over a prominent area, often associated with the base of one or more toes, although ulcers in other areas can occur. They can occur over the top of a deformed toe or at its tip. At times these occur under the ball of the foot, again related to an area that is prominent and gets disproportionately overloaded such as in a foot with high arch. Essentially, any area of the foot that is subject to concentrated repetitive force is at risk for developing a diabetic ulceration. Risk factors for developing an ulcer include not only include prominent areas taking disproportionate amount of force but also stiff or tight muscles and joints such as a tight calf muscle (equinus contracture) which serves to increase the lever force of the foot, driving the forefoot into the ground with more force. An assessment of the patient’s sensation and circulation is also important. It is also important on physical exam to assess the patient’s opposite foot, as it may have problems that have not yet been diagnosed. Inspecting shoes for worn areas or foreign objects such as small stones or nails is also important. A thickened and overgrown toenail often due to fungal infections can also lead to increased pressure due to crowding in the toe box and an ulcer.

Radiographs will usually be taken to assess whether there is any obvious bone or joint involvement. Sometimes, an MRI can be useful to determine hidden deep soft tissue infection along tendons or muscle spaces, or reveal infection in the bone. Occasionally, a bone scan is indicated, although very often the results of the bone scan will not change the management, and may not reveal any information that cannot be obtained from a detailed physical examination.

Treatment is designed to allow the ulceration to resolve. Essentially, this involves removing the pressure that caused the ulcer in the first place and thus off-loading the area of ulceration. This is typically done with a total contact cast or footwear modification that removes the offending pressure. It may be possible to fit the patient with a removable diabetic walker boot. In each instance, the goals are to offload the affected area and allow the tissues to heal. If this is done, it will often allow the ulceration to heal within 6-8 weeks for a full-blown ulceration.

The patients that are at risk for ulcerations, but have not yet developed an ulcer, may be treated with inserts that are designed to disperse the force away from the affected area. The lining of these inserts are typically made of a soft material called plastizote. It takes on the shape of the foot and helps to spread the force away from the ulcerated area. Patient education is a very important component of managing diabetic ulcerations and patients with neuropathy. Ideally, ulcerations should be treated with prevention. Patients with diabetes, and particularly those who had altered sensation in their feet should:

Treatment of the ulceration may also involve trimming (debridement) of the callus or necrotic tissue. This can sometimes be done in the clinic but not if there is infection or any bone involvement; in that case debridement in an operating room is usually necessary. In addition, it is increasingly common to perform a calf lengthening or Achilles tendon lengthening to help decrease the pressure, especially if the ulcer is on the bottom of the arch (midfoot) or ball (forefoot) of the foot. This can be highly successful, although it does need to be done with caution to prevent over-lengthening. This is done as a formal operative procedure.

Patients with diabetes and altered sensation of their feet who notice a breakdown in the skin should see a physician immediately. This is an urgent situation. The physician may want to prescribe antibiotics or they may consider simply off loading this area for a short period of time, allowing the area of skin breakdown to heal. Small areas of breakdown in the skin can become major limb threatening problems in a matter of days, if they are not carefully attended to.

Figure 1: This patient is likely to get an ulcer at the tips of the right second and third toes

Figure 2: This patient is overloading the forefoot and has calluses, blood blistering, and ulceration 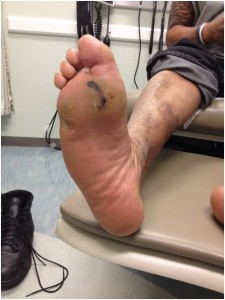