In most instances, this type of fracture can be treated non-operatively, with relative immobilization in a walking boot combined with limited weight-bearing. It typically takes about 6 weeks for adequate bone healing to occur, before patients can start to significantly increase their activity level. It often takes 12 or more weeks for a full recovery to occur. Impact activity, such as running or sports can take up to 6 months for complete bone healing. This type of injury needs to be differentiated from a “Jones fracture“, which occurs slightly further towards the center of the 5th metatarsal.

Some clinicians refer to this type of fracture as a “Dancer’s Fracture.” However, more commonly a “Dancer’s fracture” is considered a spiral fracture of the 5th metatarsal shaft that was originally described in Dancer’s. 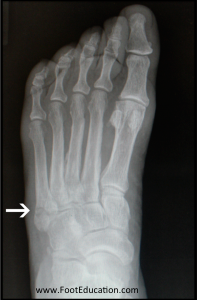 A patient who suffers an acute rolling of their ankle can also injure the base of the 5th metatarsal (See Figure 1). This will produce immediate pain over the outside aspect of the foot. It can be associated with significant swelling.  Difficulty with balance due to weakness of the peroneus brevis also occurs. Over time, the skin can turn black and blue. It will be associated with quite specific local tenderness over the base of the bone, on the outside of the foot (the 5th metatarsal). Patients who have suffered a 5th metatarsal base avulsion fracture will give a history of a twisting injury to their ankle and foot (inversion plantarflexion injury), similar to what occurs with an ankle or foot sprain (Figure 2). 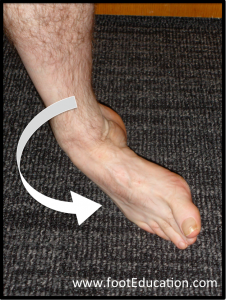 When pressing on the outside of the foot, there will be marked tenderness at the base of 5th metatarsal. There may be tenderness over a large area of the outside of the foot. However, the main tenderness will be at the base of the 5th metatarsal. On exam, it is determined if the patient can still move their foot to the outside (eversion of the foot). This is done by placing the foot in an everted position and asking them to maintain that position against some resistance. This assesses for continuity of the tendons that evert the foot. Doing this usually creates some discomfort for the patient. However, they usually are able to perform the action though with decreased strength compared with the opposite side.

X-ray of the foot will reveal an avulsion (“pulling off”) fracture of the base of the 5th metatarsal. The size of the fractured fragment may vary considerably. There will be more gapping at the fracture site, plantarly (on the bottom of the foot) and on the outside of the bone (lateral side), compared to the inside of the bone (medial side – Figures 3A and 3B).

Figure 3A: X-ray from the side (Lateral view) 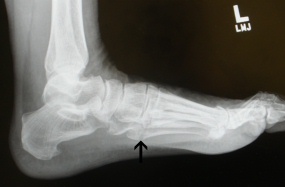 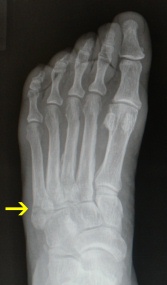 A 5th metatarsal avulsion fracture is an injury that is usually treated non-operatively. If the patient has the ability to actively move the foot outwards (eversion), the injury will likely heal with non-operative treatment. Treatment involves relative rest and time to allow the fracture to heal. Typically, patients are placed in a walking boot to immobilize the peroneus brevis tendon. For the first few weeks, they will have to significantly limit their walking and may need crutches. As the swelling settles and the fracture starts to heal, they can begin walking more extensively in the boot as patient comfort allows. Usually by 6 weeks, there is enough healing to allow them to transition to a stiff-soled shoe with lots of padding. This is a frustrating injury because it takes a long time for healing to occur. Patients are often still symptomatic 8 weeks or more after this injury. It can be many months before the bone is completely healed and a full recovery has been achieved.

When there is complete displacement of the fracture fragments and union is unlikely, surgery is indicated. In other circumstances, when a person’s employment or recreation require a reliable and routine return by 4-6 weeks, surgery may also be indicated. In these cases, the bone fragments are repositioned and stabilized with a screw and weight bearing may be started immediately.

It is important not to overlook other associated injuries such as an ankle sprain. Ankle or foot instability, when present should be addressed to avoid recurrence of ankle inversion injuries if they are not controlled adequately with physical therapy.