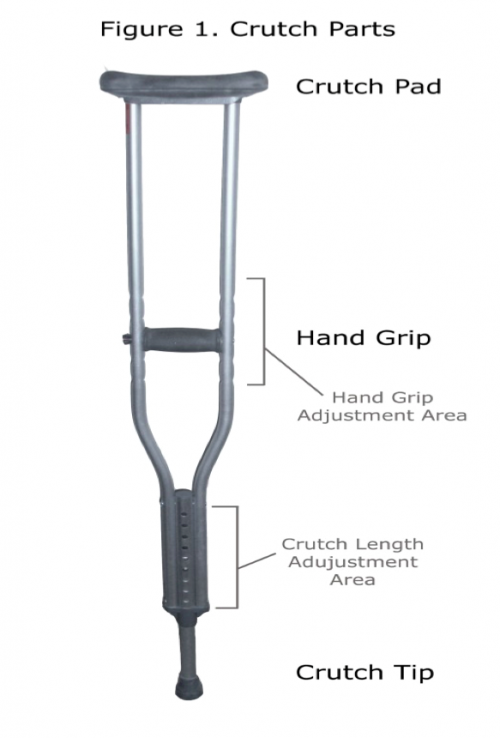 While crutches are one of the most common off-loading devices, they do require some balance and coordination to master. Crutches cause the upper body to take the weight instead of the legs. Using crutches markedly decreases the amount of force going through the involved foot, either completely eliminating the force or reducing it to a minimal, controlled amount, resulting in less pain. Patients may put weight on their “good” or uninjured foot, and ease into using the involved foot to simulate walking or a normal gait pattern, as their injury heals.

Most important is that they are fitted appropriately to the user. Using crutches set at an incorrect height can irritate the nerves traveling from the spine into the arms, resulting in some numbness or tingling in your fingers and hands. Incorrect arm angle and hand position can cause compression of the ulnar nerve which runs through the palm of the hand, causing numbness in the outer two fingers (pinky and ring finger) and may even lead to weakness in the muscles of the hand.

The main disadvantage of crutches is that patients end up putting all the weight that they would normally put through their leg, through their shoulders, so it is not uncommon to exacerbate existing shoulder problems, such as rotator cuff tendonitis or arthritis.

Hold the crutches at the side of your body. Appropriate crutch pad height is not directly under your arm, but rather about two inches below the armpit when shoulders are relaxed. You can estimate this distance by using two to three finger breadths to ensure that you are not loading the armpits. Make sure you hold them with your arms, and not jammed into your armpits. Adjust the handgrip so that the elbow is flexed at about 15 to 30 degrees. When you take a step, your arm should fully straighten so that you are loading through locked elbows.

In order to become a crutch master, you need to learn about the tripod position – the position in which you stand and from which you begin walking, when using crutches. Your feet should be facing forward, together, keeping your weight off of the injured foot. The crutches are loosely underneath your armpits so that the poles are about four to six inches to the side and in front of each foot, and your elbows are slightly bent. This arrangement of the feet and crutch poles creates a solid and stable triangular base at which you are able to rest as well as be ready to move forward.

To walk, begin in the tripod position, then lean forward slightly and pick up both crutches and place them about one to two feet in front of your legs. Move the affected foot/leg forward (as if stepping) but shift your weight to the crutches instead of using the foot. As you transfer weight from the “good” (weight-bearing) foot to the crutches, keep your arms straight so that you load through locked elbows. Then, let the momentum of the crutches carry your body forward, lightly swing the “good” foot forward through the crutches as you put it down. Be careful not to land too far in front of the crutches. When the “good” foot is on the ground, move your crutches ahead in preparation for the next step. Keep focused on where you are walking, not on your feet. Watch out for slippery surfaces and make sure you wear well-fitting, low-heeled shoes (or shoe).

There comes a time for every crutch master to hang up their crutches long enough to sit down and give their upper body a break. To avoid needless injuries, care must be taken even when settling down to relax. Make sure that the chair is stable and will not roll or slide, and has arms and back support (especially since it is the upper body that needs resting). Before you begin, get close enough to the chair so that the backs of your legs are touching the front of the seat and keep your injured foot in front of you. To ease yourself down with balance and stability, place both crutches in one hand and your other hand on the chair arm. Follow the same rules when raising yourself from the chair – use the stable chair arm, on one side, and the crutches on the other side, for support.

While your crutching prowess improves with practice, stairs can prove difficult to tackle no matter how long you’ve been at it. For patients with serious injuries or for those fresh out of surgery, conservative methods should be employed for stair climbing – seated. Place the crutches up the stairs as far as you can reach and move them up as you progress. Start by sitting down on the bottom step and reaching your arms behind you. Then push yourself to the next step using your arms and “good” (weight-bearing) leg. Keep inching your way up until you make it to the top. The same pattern should be followed when going downstairs.

Patients with more stable injuries and enough strength and flexibility may elect to crutch up the stairs a different way. Stay balanced by facing the stairway and holding the handrail with one hand and using both crutches under the other arm. When going up, lead with the “good” foot, keeping the affected food behind you. When going down, keep the affected foot out in front, and hop down each stair on the “good” foot. Take it one step at a time. If the stairs do not have handrails, you will have to use more strength to hop up or down on the “good” leg using the crutches under both arms.