What is Clubfoot Deformity?

Clubfoot is a foot deformity in newborns where the foot is rotated inwards (varus) and downwards (equinus) (Figure 1). The vast majority of clubfoot deformities are congenital in nature, and therefore acquired during development in the uterus and not through heredity. It occurs in approximately 1 in 1000 births and is bilateral about 50% of the time. A small percentage are related to a genetic or chromosomal abnormality and these deformities tend to be stiffer with more resistance to standard treatment. 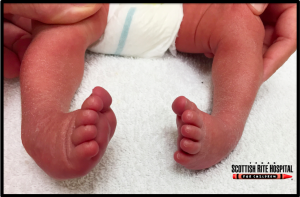 The Ponseti method has become the standard treatment in the past decade. This treatment involves gently manipulating and then casting the foot on a weekly basis over a 4-6 week period (Figure 2). The child is then splinted 23 hours a day in a Foot Abduction Brace (Figure 3) for a number of weeks after the casting, and then when the child sleeps or naps for up to 4 years. About 80% of children will need to have the Achilles tendon lengthened via a small incision at the back of the heel. A small percentage will require other tendon procedures, but major foot surgery which was the norm 20 years ago is no longer required. This technique was developed by Dr. Ignacio Ponseti (1914-2009) in the 1940s, but only became popularized in the 1990s after stories of its success relative to the standard surgical treatment spread over the internet. 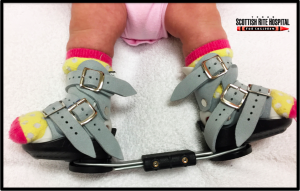 Untreated clubfoot deformities continue to be a problem in the developing world. In severe cases adults walk on what should be the top of their feet, creating a debilitating limp. Clubfoot deformities that were treated aggressively in the past can also cause symptoms in adults, due to persistent stiffness and overcorrection.

Persistent deformity resulting in uneven loading of the foot to the outside, ankle arthritis, and hindfoot arthritis is common. The ankle bone, or talus, is often flattened (flat top talus).

Even a well treated congenital clubfoot is likely to have some residual foot issues, which may include a smaller foot that tends to load more on the outside. This can lead to 5th MT stress fractures, peroneal tendonitis, and arthritis.