The hallmark of anterolateral impingement syndrome of the ankle is pain located in the front of the ankle, at its outermost aspect. This pain can often be made worse when a patient bends over their foot moving forward. This condition is most commonly the result of soft tissue scar buildup in this location after prior injury to the ankle (sprain, fracture), or from an inflammatory process affecting the ankle. The redundant tissue effectively gets pinched or “sandwiched” between the bones as the available space decreases during certain movements (dorsiflexion). The pain is usually quite localized, and pressing on this area while moving the ankle joint will usually reproduce symptoms. Anterolateral ankle impingement is best diagnosed based on a good clinical exam, as well as history taken from an experienced clinician. The pillars of non-operative treatment typically include avoiding aggravating activities, icing, and/or bracing the ankle. Patients that do not respond to such measures often become candidates for arthroscopic surgery, which is a procedure to clean out the scar tissue in this region of the ankle.

Pain at the front and outside aspect of the ankle joint (“anterolateral” region) is the main feature of anterolateral ankle impingement. This pain is often precipitated when the leg is bent forward over the ankle (dorsiflexed). There may be a history of a twisting ankle injury in the past. The location of the pain is quite discrete, and can be associated with a fullness or swelling which is very specific to this area (Figure 1). Pressing on the outside (lateral) aspect of the ankle joint line and bringing the foot upwards (dorsiflexing) will usually recreate the symptoms. In some cases, there can be some associated looseness in the ankle joint (ankle instability) which must also be addressed.

What is the Cause? (Etiology and Pathology)

Symptoms from anterolateral ankle impingement occur when there is a build-up of scar tissue in the outer (lateral) aspect of the ankle joint. When the foot is brought upwards, the lower bone of the ankle joint (the talus) jams or “pinches” this tissue buildup between it and the upper bones of the ankle (the fibula and tibia). This can be quite painful. When this occurs, it is classically the result of a prior ankle sprain, whereby patients tear one or several ligaments along the outer aspect of their ankle after inverting or twisting their foot, and these then (in the process of trying to heal) form a large “mass of inflammatory tissue, which should normally not be present.

Although several laterally located ligaments in the ankle can be responsible for anterolateral impingement syndrome, the ligament most commonly associated with this problem is called the anterior inferior tibiofibular ligament (one of the ligaments that holds the two bones of the lower leg together at the level of the ankle) (Figure 2). Tearing of the lower bands of this ligament can produce a prominent soft-tissue mass, synovitis, or generalized inflammation in this region, leading to eventual impingement. The anterior inferior tibiofibular ligament is the main ligament that is injured in a “high ankle sprain.” Therefore, anterolateral ankle impingement is one possible consequence of a high ankle sprain. 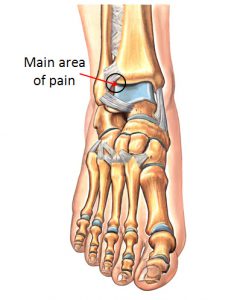 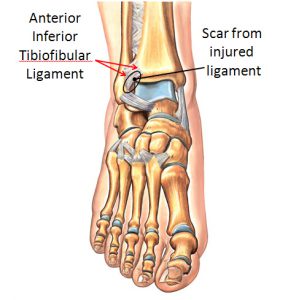 In general, anterolateral ankle impingement (or ALIS, as it is sometimes called) will not be identified on plain x-rays, and may also be missed on an MRI. When anterolateral ankle impingement is observed on an MRI, it is usually seen on the axial view (Figure 3). Typically, this diagnosis is made based on the patient’s history and the localized tenderness on physical examination. The diagnosis is sometimes confirmed by a diagnostic corticosteroid injection, which can also often be therapeutic. If the symptoms persist, the diagnosis can be confirmed during arthroscopic surgery where the actual jamming (impingement) can be observed (and treated). 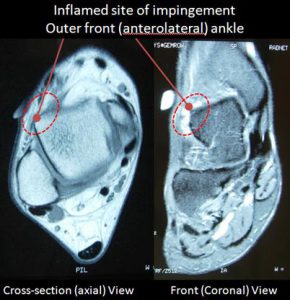 True anterolateral ankle impingement is the result of a physical impediment inside the ankle joint that affects the functioning of the joint. Fortunately, non-operative management is often quite effective in treating this problem. Various treatment options which may be helpful include:

Surgery for true anterolateral ankle impingement ankle joint can be very effective, but should only be considered after attempts at non-operative intervention have failed. When surgery is required to improve this problem, arthroscopy has traditionally been the treatment of choice for the surgeon. Arthroscopic surgery utilizes a tube-like camera and fine custom designed instruments to enter the ankle joint through small “key” holes (Figure 4). The scarring that causes anterolateral ankle impingement can also be removed by larger incisions using a more formal open approach to the ankle, but such additional surgery is generally only favorable if other interventions that cannot be done arthroscopically are required for the ankle at the same time.

Placing an arthroscope inside the ankle joint allows the surgeon to inspect the entire ankle joint, which is a tremendous advantage in the event that there are other problems elsewhere in the ankle. It also permits direct visualization of the impinging soft-tissue scar when the foot is flexed up (dorsiflexed). Sometimes, the repetitive jamming will have caused some of the cartilage on the outside of the talus (lower bone of the ankle) to be worn away. Sometimes, other ankle problems such as a talar osteochondral lesion or ankle instability will also be found present and will need to be addressed surgically at the same time. 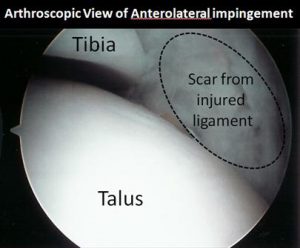 Surgery for ALIS generally works quite well and can provide a reasonable return to function with good pain relief. If surgery involves only cleaning up the scar tissue along the outer aspect of the ankle, then the recovery is often fairly quick. There is usually a 6-8 week period of increased ankle pain and swelling, during which time the patient may have a limping gait. Full recovery can, however, take 3-6 months or longer.

When there are other things going on inside or around the ankle joint (ex. Talar OCL, ankle arthritis, peroneal tendonitis, ankle instability, etc.) that necessitate correction at the same time, recovery could take much longer, even though the outcome can still be very promising for many patients. The implications and severity of these additional findings can obviously affect long-term outcome, however, and so they should always be discussed with your doctor both before and after any surgical intervention.

This type of arthroscopic surgery typically has a very low complication rate, and the procedure is typically performed as an outpatient (not overnight) procedure. However, as with all orthopedic surgery, risks include: