Tibialis Anterior Tendonitis leads to pain and often swelling in the front of the ankle and into the midfoot. Sometimes the tendon may have degeneration within it as well, and not just inflammation. Symptoms typically occur in middle-aged and older individuals, and are aggravated by standing and walking. Treatment is designed to limit the loading through the tendon and allow the tendon inflammation to settle. Occasionally, tibialis anterior tendonitis will be a precursor to a rupture of the anterior tibial tendon. Except in the instance of tendon rupture, surgery is usually not necessary. However, for individuals that have truly failed non-operative management, surgery to clean out the tendon and possibly lengthen the calf muscle may be indicated.

Tibialis Anterior Tendonitis is an irritation and swelling of one of the main tendons that lifts the foot up – the anterior tibial tendon which is also known as the tibialis anterior. This condition leads to pain in the front of the ankle or the medial midfoot where it inserts on the bone (Figure 1). It is often chronic and may also be associated with some swelling in this area. Symptoms tend to occur in patients that are middle-aged or older. Symptoms may be aggravated by increased activity, such as standing and walking.

In a small percentage of patients, anterior tibialis tendonitis will be a precursor to anterior tibial tendon rupture. This will be associated with a sharp pain in the front of the ankle often extending into the inside of the midfoot. Weakness in the ability to bring the foot upward will be noted. Over time, if a rupture of the anterior tibial tendon is missed and not treated there may be increased clawing of the toes, as the tendons to the toes will now be doing most of the work in elevating the foot. Patients may also complain of the foot slapping on the ground when they walk.

Figure 1: Location of Pain and Swelling in Anterior Tibial Tendonitis 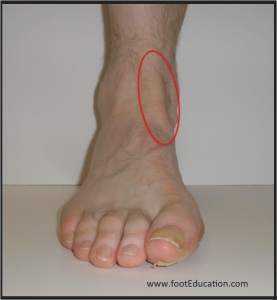 Examination will often reveal tenderness or even swelling over the anterior tibial tendon in front of the ankle (Figure 2). This is one of the primary tendons that lifts the foot upwards, therefore, resistance to moving the foot upwards (dorsiflexion) will often exacerbate symptoms. There may be a tightness of the calf muscle (equinus contracture). 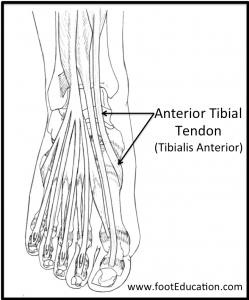 Plain x-rays of the foot and ankle are often negative as this is a problem involving a tendon (soft tissue) that will not usually be seen on plain x-rays.

An MRI of this area will reveal swelling and inflammation of the lining of the tendon sheath that the anterior tibial tendon runs through. There will often be fluid around this tendon, and there may be signs of degenerative change within the tendon itself.

Treatment for this condition is initially non-operative and is usually successful in settling the symptoms. The treatment involves relative rest of the irritated tendon. This can be done by:

Caution: Corticosteroid injections in this region may help settle the symptoms but may increase the risk of rupture of this tendon.

In instances where the symptoms cannot be managed adequately through non-operative management, surgery may be an option. Surgery consists of cleaning out the tendon (debriding) as well as, possibly lengthening out the calf muscle.