The ankle is not a joint that tolerates any displacement as this will lead to uneven loading of the ankle joint, and the subsequent development of ankle arthritis (loss of joint cartilage) in a short period of time. If an ankle fracture has lead to a displaced or unstable ankle joint, (Figure 1) then surgery is indicated for most patients (some high-risk patients may not be surgical candidates). If the fracture causes the lower bone of the ankle joint (talus) to be displaced by 1 millimeter or more the joint surface of the ankle will be “mismatched” and ankle arthritis will tend to develop over time. 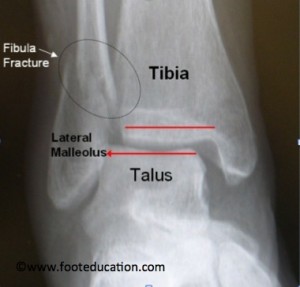 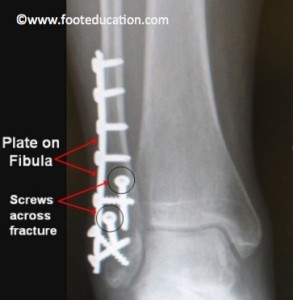 This procedure involves surgical treatment of both a fractured medial malleolus and lateral malleolus. These two procedures are done separately (two different incisions) but are performed together under the same anesthetic. Like each individual procedure, the goal is to reduce the fractures into the position that they were in prior to the fracture and to ensure that the ankle joint itself is perfectly positioned (anatomically reduced) and stable.

This procedure is similar to that used to fix a bimalleolar ankle fracture, except it also involves a fragment in the back aspect (posterior) of the tibia. If the fragment represents less than 20% of the joint surface of the tibia (as viewed on the lateral x-ray from the side of the joint), then it is disregarded and treated like a bimalleolar fracture. However, if greater than 20%, the fragment needs to be repositioned. Reducing the fragment can be done in a similar process to a lateral malleolus fracture or by making an incision near the back, outside aspect of the ankle. Once reduced, it is usually fixed with a screw or two from the front to the back of the ankle.

When an ankle fracture occurs, it is not only the bones that are injured. All the surrounding structures ( tendons, ligaments, muscles, nerves, joint cartilage) also sustain injury, which can vary from minor to permanent. One of these structures, articular cartilage (the cartilage that lines the joint surfaces) can be damaged or scarring can occur within the joint. This can cause ongoing pain that sometimes requires further surgery, such as arthroscopy to look inside the joint.

If the strong fibrous tissues holding the tibia and fibula together (syndesmosis) is injured (partially torn) or disrupted (completely torn), it should be repaired. This injury can occur with a fracture of the fibula far away from the ankle joint or without any fracture at all. The surgeon will often assess the stability of the syndesmosis, either before or during surgery, by “stressing” the ankle under fluoroscopy (a portable x-ray) or performing weight-bearing x-rays (if this is possible) to see if the ankle “opens up” (does the talus shift out of position when stressed). The syndesmosis can sometimes be assessed during an ankle arthroscopy (looking inside the ankle joint with a small camera). If the syndesmosis is determined to be unstable, the syndesmosis is stabilized so that it will heal in the desired (reduced) position. The syndesmosis is usually stabilized by putting one or two screws across the fibula and into the tibia, in order to stabilize these bones and allow the syndesmosis to heal. After approximately 3-6 months, (once the syndesmosis has healed) the screws are removed. In some situations, the surgeon may choose to repair the syndesmosis directly with strong sutures.

Patients undergoing this type of surgery will typically need about 6 weeks for the bone to heal. During this period, the patient is either in a cast boot or post-operative shoe and remains non-weight bearing or touch weight-bearing through the heel.

At 6 weeks post-operatively, patients can begin to increase weight bearing as tolerated in a protective boot.

Patients can begin transitioning into a shoe and continue to rehabilitate at this point.

Injury to the Superficial peroneal nerve or the Sural nerve can occur due to the placement of the incisions, specifically for a lateral malleolous fracture. Nerve injury can occur due to retraction, direct injury, or from scarring during the recovery process. If these nerves are injured or cut, the patient could end up with numbness or pain along the path of the nerve (onto the top or outside of the foot).

Due to the lack of movement after the surgery, calf muscles have a potential to atrophy. The calf muscles may take a while to strengthen, which may never reach their full potential prior to surgery.

About 15-20% of patients experience pain associated with the screws and plates that are used to secure the bone fragments. These patients will need to undergo removal of the screws due to discomfort, once the bones have healed.

Failure of Hardware with Syndesmosis

If the syndesmosis is fixed, there may be a potential for the screws to break at the syndesmosis if they are not taken out early enough. Although it may sound very troubling, the broken screws have no bearing on the patient’s symptoms. The potential complication is not considered significant; however, it may interfere with the resolution of an MRI.

Rarely, after removal of the syndesmotic fixation, an injury may recur if the ligaments have not healed adequately. This may show itself as ongoing pain in the region. Should this happen, it may require further surgery to the region.

Some patients may be at risk of venous thromboembolism (clotting) related to the surgery and post-operative immobilization. Your surgeon may choose to commence anticoagulation (blood thinning medications) after undertaking a risk assessment of your situation. Those most at risk of venous thromboembolism are those who have had blood clots in the past.