Gout is a painful arthritic condition that can affect any joint or even soft tissues such as tendons, but commonly involves the joint at the base of the great toe (see Figure 1). Gout occurs when uric acid (normally present in the blood) crystallizes in the lining of the involved joint. These uric acid crystals cause an intense inflammatory reaction that often creates marked pain and swelling. Risk factors for gout include elevated blood uric acid levels, potentiated by a diet high in red meat, seafood, or alcohol. Initial treatment is aimed at decreasing symptoms and may include the use of medications designed to decrease inflammation, rest, and ice. Long-term management is oriented towards preventing recurrent attacks and limiting the long-term effects that gout may have on the involved joint. 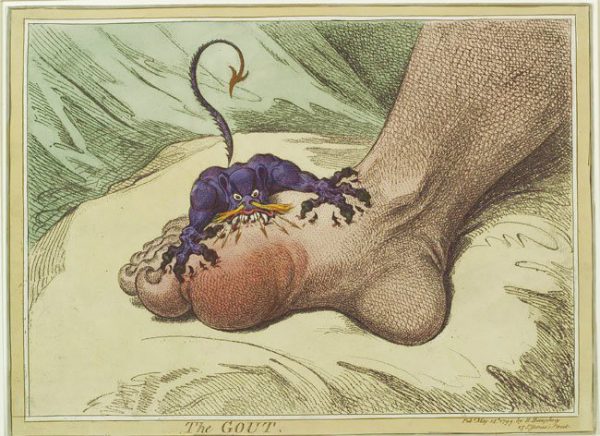 Gout describes a medical condition in which crystals deposit themselves in various tissues in the human body. These crystals are made of a substance called uric acid, a substance normally found in human metabolism as we break down the various chemicals that make up DNA. Uric acid is normally dissolved in our blood and excreted in our urine, but when its concentration gets too high or in patients prone to gout, it can crystallize out of the blood and deposit into joints, tendons, or other issues.

Patients often report a relatively sudden onset of severe symptoms including pain, swelling, and redness. Gout may involve almost any joint in the body, but in about 75% of first attacks, it affects the joint at the base of the big toe (Podagra). Less commonly it can also affect the ankle. We know that certain individuals are more susceptible to attacks of gout:

Not all patients with gout have a high uric acid, though many do, and therefore the diagnosis of gout is often based on a patient’s symptoms. The diagnosis of gout is confirmed by removing fluid from the affected joint (“tapping” or “aspirating” the joint) and looking at it under the microscope. Elongated rods of uric acid crystals will be seen when viewed under the microscope with polarized light.

X-rays are likely to be normal, except after multiple attacks or if there are other problems in the joint, such as hallux rigidus (arthritis) in the great toe. In patients who have suffered from gout over a long period of time, crystal collections (called “tophi”) may reach a size where they can be seen on x-rays or may show bone erosions around the joint characteristic of gout. X-rays can be helpful to rule out other conditions that may cause similar symptoms, such as fractures, severe osteoarthritis, Charcot arthropathy, infection, or pseudogout (another type of crystal that can also deposit in joints). MRI is usually not indicated in making the diagnosis of gout.

The initial treatment of a gout attack is aimed at reducing the pain, which can be quite severe. After the initial symptoms have been resolved, long-term management of gout focuses on minimizing the risk of future attacks of gout.

A variety of treatment approaches have been recommended to minimize the risk of recurrent gout attacks including: