Compartment Syndrome of the Foot

Patients with compartment syndrome of the foot report intense pain and swelling. This condition is uncommon, but when it occurs it is usually associated with a major injury to the foot, such as a fracture of the heel (calcaneal fracture) or a major midfoot fracture or dislocation. When there is significant swelling in the muscles of the foot, this swelling may be restricted by the tense fibrous tissue (fascia) that surrounds each “compartment” of muscles. As a result, the muscles lose oxygenation from lack of blood supply. Intense pain and eventually muscle death can occur.

On examination, the foot will usually be markedly swollen and the muscles tense (Figure 1). An associated traumatic injury to the foot is usually present. In severe cases, there may also be a decrease in sensation to the toes. Movement of the toes will create significant pain in the foot for conscious patients. 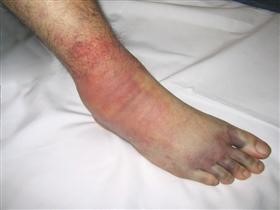 X-rays will demonstrate the associated underlying foot injury, but will not be able to specifically diagnose the compartment syndrome.

It is best to suspect a diagnosis of acute compartment syndrome of the foot in any patient with a high-energy trauma. Typical signs and symptoms may be absent, especially if there are distracting injuries or the patient has an altered level of consciousness. Once suspected the initial treatment should include removing all restrictive dressings.

Specific treatment for compartment syndrome is controversial. The muscles of the foot are small. It is always difficult to know the extent to which they are involved. If compartment syndrome does result in muscle death over time, the resulting sequelae will be significant clawing of the lesser toes, pain, and dysfunction in the foot.

Figure 2: Incisions on the top (dorsum) of the foot used to release these muscle compartments of the foot.