Edited by Daniel Cuttica, DO

The peroneal tendons are the main tendons that run along the outside part of the foot and ankle. There are two peroneal tendons (Figure 1). The first is called the peroneus brevis. The term “brevis” implies short. It is called this because it has a shorter muscle and starts lower in the leg. It then runs down around the back of the bone called the fibula on the outside of the leg and inserts (i.e. connects) to the fifth metatarsal. This is on the outside part of the foot. The peroneus longus takes its name because it has a longer course. It starts higher on the leg and runs all the way underneath the foot to insert or connect onto one of the bones (1st metatarsal) on the inside of the foot.

Figure 1: Tendons of the Peroneus Longus and Brevis 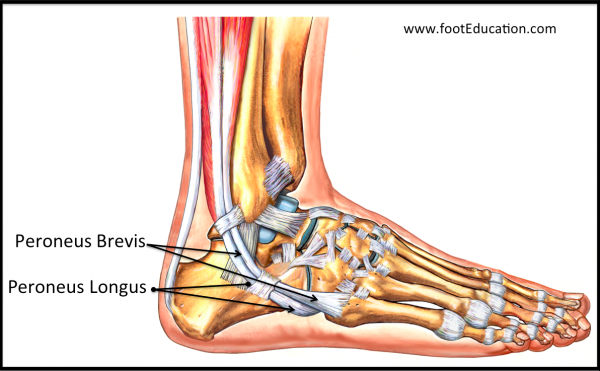 A patient with an acute peroneal tendon subluxation will experience pain on the back and outer part of their ankle following an injury. At the time of the injury, one of the two tendons that is normally positioned behind the fibula bone on the outside of the ankle, pops around the fibula. When this occurs, the tendon can damage both restraining structures, including the soft tissue, known as the “superior peroneal retinaculum” (SPR), and also the bone itself. The pain can be quite significant and can lead to a pronounced limp and, in some cases, an inability to walk.

On exam, patients with an acute peroneal tendon subluxation will have quite marked tenderness on the back part of the distal fibula, which is the bone on the outside of the ankle. When the foot forced in an outward direction, (everted) the peroneal tendons may be prominent and even pop over the edge of the prominent fibula (subluxation). This maneuver in the acute setting will create a significant amount of discomfort.

X-rays of patients with an acute peroneal subluxation are often normal, but may show a small rim of bone that has been pulled off (avulsed) of the back part (posterior) of the fibula.

Treatment of an acute peroneal tendon subluxation can be non-surgical or surgical. Treatment requires that the tendons be kept back in position behind the fibula and that they be held there until the soft tissues and any bony fragment has healed. This requires a period of approximately six weeks of immobilization (cast or walking boot). Following that, a rehab program is gradually started to restore the strength and function of the peroneal tendons.

Nonsurgical treatment for acute injuries in active young athletes has a relatively high chance of recurring. Therefore, in active patients, surgical fixation of the injured SPR is often the treatment of choice, although in some instances a course of immobilization may be tried. In addition, surgical treatment of an acute peroneal subluxation is necessary when the peroneal tendons cannot be contained behind the bone on the outside of the ankle either because the associated avulsion bone fragment is too large or by the nature of the shape of the fibula.