Freiberg’s disease is associated with pain in the forefoot. It involves softening (osteonecrosis) of one of the metatarsal heads (Figure 1). It usually occurs in patients that are adolescents or young teenagers that are growing. Excessive loads applied to the area may lead to avascularity and microfracture of the metatarsal head. Freiberg’s disease is associated with swelling and localized discomfort, usually at the base of the second toe. Patients often limp during the acute phase of the condition, although in some patients it can be chronic before it is diagnosed. Frieberg’s disease may also be referred to as Freiberg’s infarction or Freiberg’s infraction (a combination of infarction and fracture).

In Freiberg’s disease, examination often reveals swelling and localized tenderness at the ball of the foot and the joint associated with the involved toe. The joint at the base of the toe is often swollen and uncomfortable when it is palpated. It is not uncommon for Freiberg’s disease to be associated with a long second toe, as this can increase the repetitive force that the second metatarsal head is subject to.

If an MRI is ordered, there will be evidence of fluid in the joint and significant bone edema in the metatarsal head. 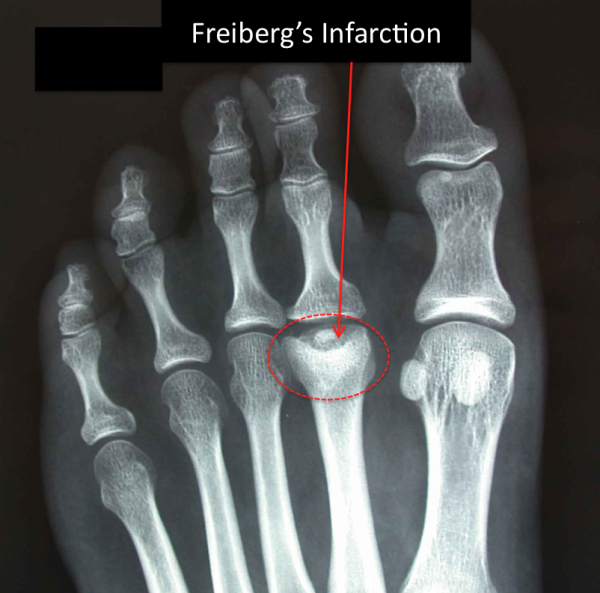 Most cases of Freiberg’s disease are treated non-operatively. Most often the area is protected with a comfort shoe (a shoe with a soft rubber sole and a wide toe box) and often a metatarsal pad to help offload the area.

Occasionally if symptoms are severe, an initial period of protected weight bearing with a walker boot or even a cast may be helpful for a period of two weeks. Anti-inflammatory medications may be helpful. Over time, as the inflammation resolves, the bone in the metatarsal head heals or re-vascularizes and symptoms will decrease. However, there may be some residual deformity in the joint, resulting in mild discomfort that persists over time.

Surgical treatment of Freiberg’s is uncommon. If non-operative management fails, there may be some benefit to cleaning out (debriding) the joint. If the associated metatarsal is excessively long, there may be some benefit to performing a shortening osteotomy. If there is synovitis, fragmentation or loose body within the joint, and a misshapen metatarsal head, it may be necessary to perform synovectomy, debridement, and contouring of the metatarsal head. However, in most instances, this is a condition that is managed without surgery.