An open Achilles tendon repair is performed through an approximately 3-inch incision running down the back of the ankle over the site of tendon rupture. Each of the ruptured tendon ends are sewn with suture, and the sutures from each end are tied to each other with the ankle pointing downwards so that the Achilles tendon is now under normal tension with the tendon ends touching each other. The wound is carefully closed and the ankle placed in a splint to protect both the wound and the repaired Achilles tendon as they begin to heal. (see Figure 1)

Minimally invasive approaches may also be used to repair the Achilles tendon and are often referred to as a “mini-open” technique (see Figure 2). In this procedure, a small incision measuring approximate half an inch is made over the Achilles rupture site. The Achilles tendon glides within a tendon sheath, and a special instrument is then used to pass sutures through the Achilles tendon and into this sheath using needles through the skin without making an actual incision running down the entire length of the repair, and the sutures are then pulled into the half-inch incision where they are tied. The “mini open” technique has the advantages of a smaller incision and a potentially lower rate of wound healing issues, but has the disadvantage of less visualization of the ruptured tendon and a potentially higher rate of associated nerve injury. 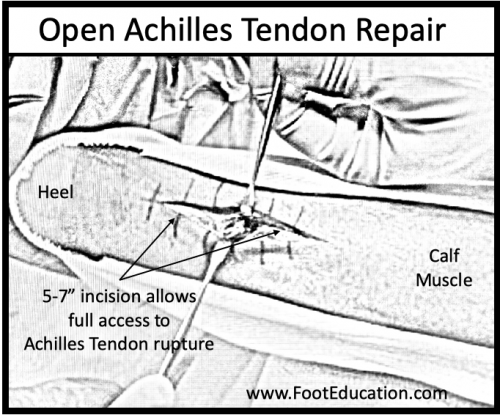 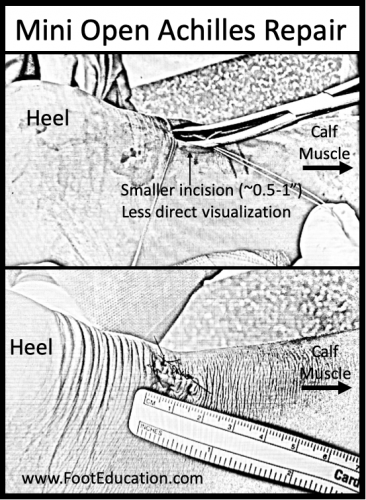 Historically, after surgery patients would be placed in a cast with their toes pointing downwards for 6-8 weeks. More recently, studies have highlighted the importance of a functional rehabilitation protocol in which the ankle is briefly immobilized to let the wound heal, but, thereafter, gradually increasing activity is allowed. This often entails gently moving the ankle to cause just a little bit of motion and tension at the healing tear site so that the tendon heals more strongly and with a less disorganized scar, but not too much tension so that it stretches or even re-tears the repair. Weight-bearing is gradually allowed in a specialized boot with multiple wedges under the heel so that the toes continue to point downwards and the repair isn’t stretched. These wedges are gradually removed so that the ankle is brought upwards in a controlled fashion over the course of the initial weeks to months of recovery. Once out of the boot, progressive strengthening is allowed and a return to full sport participation generally takes 6-12 months.